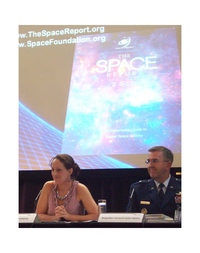 The Space Foundation further expanded its international influence last month with a series of activities held in conjunction with the Farnborough Airshow in the United Kingdom, including participation in a lecture program, sponsoring a dinner, and meeting with key space leaders.

The most public event was “Perspectives on the Military Use of Space,” a series of presentations followed by discussion at the Royal United Sciences Institute (RUSI), on July 22 featuring Air Commodore Stuart Evans, RAF, head of joint doctrine, air and space for the Development, Concepts and Doctrine Centre (DCDC) think tank, which is part of UK Ministry of Defence; Brigadier General John Hyten, USAF, director of space acquisition for the Office of the Undersecretary of the (United States) Air Force; and Space Foundation Chief Executive Officer Elliot Pulham. Following the official remarks, the panelists engaged in an “off the record” question and answer session.

Elizabeth Quintana, head of military technology and acquisition for RUSI, opened the program by pointing out the need for public awareness of space policy, advances and public uses for space technology, and overall space education.

Evans introduced the UK Military Space Primer, a new DCDC publication that provides a basic introduction to principles behind space science. “The primer provides a gateway for space mindedness,” said Evans. “We hope it will eventually produce more intelligent customers – space technology consumers – to include both the military and the general public.”

Hyten addressed the new emerging U.S. Space Policy. “Basic changes within our military systems are – or should be – working together to create a seamless transition toward advancing space programs,” he said. “It’s like changing out warfighters’ airplane engines to improve their capabilities; what may be an undetected improvement from the perspective of the warfighter will increase the overall capabilities of the military.” He also called for international cooperation to accomplish the tasks ahead.

Pulham discussed the findings published in The Space Report 2010: The Authoritative Guide to Global Space Activity, the Space Foundation’s annual overview and outlook for the global space industry. He spoke about space products and services, space activity, revenues and investments, space agency budgets and growth, commercial satellite and launch forecasts, and an outlook for the new U.S. Space Policy. The Space Foundation also distributed a white paper that compares the 2010 National Space Policy to the 2006 National Space Policy.

Dinner Celebrates UK Space Agency
While in London, the Space Foundation also hosted a dinner at the Connaught Hotel to celebrate the recent formation of the UK Space Agency. Co-sponsored by SM&A, a defense and aerospace consulting firm based in Newport Beach, Calif., the dinner brought together 40 space leaders representing industry, UK governmental agencies, the European Space Agency, NASA, and the U.S. Department of Defense. Featured speaker Dr. David Williams, acting chief executive of the UK Space Agency, shared insights and goals for the future collaboration.

“This was an excellent opportunity to take some time for collaboration and trust so that we can continue to build support for space programs and growth,” said SM&A President and Chief Executive Officer Cathy McCarthy. “It is important to support the mission of both the Space Foundation and the UK Space Agency so that we continue to attract talent and improve technology. SM&A has a history of supporting space programs and is pleased to be part of building the future.”

Space Foundation Participate in Charity Event
During the visit, Pulham and Hyten also met with a number of space leaders and attended a dinner at the Royal Air Force Club in support of the Soldiers, Sailors, Airmen and Families Association, a UK-based a charity that has been providing welfare to military personnel and their families for the past 125 years. Space Foundation corporate members supporting the event included Northrop Grumman, Raytheon, BAE Systems, and Cobham.