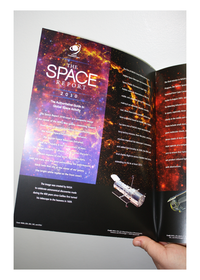 The new U.S. national space policy, released in June 2010, contains significant changes from the previous policy, released in 2006. One example is an expanded list of the ways in which the United States intends to engage in international cooperation on space-related projects, reflecting the increase in the number of countries that are developing or expanding space capabilities.

By the end of 2009, at least 49 countries had deployed civil satellites, either on their own or in cooperation with other nations, and more than 115 countries owned at least a share in an operating satellite. During the next five years, more than 100 missions into space are planned by civilian space agencies from more than 15 nations. These range from automated cargo spacecraft and robotic exploration probes to meteorological and technology development satellites.

The globalization of space activity continues to draw new market entrants as national governments realize the value of space programs – including applications and infrastructure – for addressing strategic, economic, and social goals. This trend is particularly evident in Asia, which previously had experienced a much lower level of space activity. While a number of Asian countries have long-standing space programs, in recent years the region has emerged as a significant hub for space activity. Over the next five years, an estimated 25 Asian-manufactured satellites are scheduled for launch, with an additional three countries – Malaysia, Pakistan, and Vietnam – planning to purchase payloads for national programs. Economic growth and regional competition among Asian powers has resulted in renewed focus and increased investment in space programs. As a result, Japan, China, India, and South Korea are increasingly moving to match the technological levels achieved by the United States, Europe, and Russia.

The increasing number of countries and organizations participating in space activities is leading to more opportunities for international collaboration. Examples of evolving and expanding programs include more than two dozen United Nations bodies involved in space activity. During 2009, the chairman of the United Nations Committee on the Peaceful Uses of Outer Space (COPUOS) published a policy paper on the need to develop a U.N. space policy in order to inform, guide, and promote cooperation among U.N. members within the space arena.

In another example of collaborative opportunities, representatives from most of the European Union’s 27 member states expressed support for investment in space exploration. They are considering a space exploration roadmap, including robotic and human missions to the Moon and Mars in collaboration with the United States, Russia, Japan, China, India, and other nations. This attitude is similar to the one expressed in the final report of the Review of U.S. Human Space Flight Plans Committee, which recognized the importance of international partnerships and collaboration.

The new U.S. national space policy, which favors international cooperation, meshes well with recent indicators of European policy whereby the U.S. could maximize investments in exploration by working more closely with partners in Europe. Should Europe and the United States outline a common roadmap, other space powers might join in the initiative, setting the stage for a new approach to international space activity. As a further indication of the movement toward more international partnerships, in November 2009 the United States and China announced a general agreement to pursue more bilateral cooperation in civil space activities.

In light of the rapidly developing space capabilities in other nations, it is understandable that the U.S. government is seeking to strengthen international relationships in this arena, both to open new markets for U.S. industry and to find areas of mutual benefit. More information about international cooperation in a variety of fields, including space exploration, space security, and commercial activity, is available in The Space Report 2010: The Authoritative Guide to Space Activity. The Space Foundation has also published a comparison of the 2010 U.S. National Space Policy and the 2006 policy, available at www.SpaceFoundation.org/research.