2010 Was the Biggest Christmas Ever for NORAD 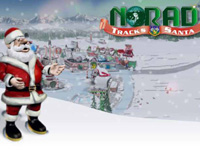 NORAD Tracks Santa, which is designated by the Space Foundation as a Certified Imagination ProductTM, logged a record number of phone calls and emails on Christmas Eve 2010.

The North American Aerospace Defense Command (NORAD) runs the program, which for more than 50 years has tracked Santa and provided updates to children around the world. Certified Imagination Products, one of three Space Foundation Space Certification categories, include toys and entertainment products that increase interest in and excitement for space. The Space Certification Program recognizes products and technologies originally developed for space or improved through space utilization that have been adapted to improve life on Earth.

Last week NORAD said that volunteers answered more than 80,000 phone calls and more than 7,000 e-mails on Santa’s whereabouts — compared to 74,000 phone calls and 3,500 e-mails in 2009. Even more significant, however, was the volume of Internet contacts. Unique visitors to the NORAD Tracks Santa website exceeded 15.5 million, up from 13 million the previous year. The program also had 715,000 Facebook contacts and 53,000 Twitter followers.

First Lady Michelle Obama was one of the more than 1,200 volunteers who answered the calls from children wanting to know where Santa was on his Christmas Eve journey around the world. She took calls via a phone hookup from Hawaii, where her family was vacationing. It’s believed to be the first time a first lady has participated in the program.

The program began on Christmas Eve 1955 when a Colorado Springs Sears Roebuck & Co. store advertisement for children to call Santa listed the phone number for NORAD’s predecessor, the Continental Air Defense Command (CONAD), by mistake. Rather than disappoint callers, the CONAD staff checked their radar and provided children with updates on Santa’s whereabouts.

In 1958, when Canada and the United States created NORAD, a bi-national air defense command for the North American continent, the new entity took over the job of tracking Santa. NORAD uses four high-tech systems to track Santa – radar, satellites, Santa Cams and jet fighter aircraft. Using a variety of technology developed for the space program, NORAD Tracks Santa inspires children around the world to think about how space technology and exploration play an increasingly important role in our daily lives.