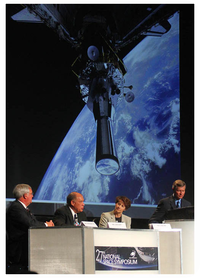 A special treat of the 27th National Space Symposium was a number of programs and events saluting the Space Shuttle program, which is scheduled to end later this year. On the main agenda was a panel featuring six former Space Shuttle commanders, who spoke about their experiences. Following are excerpts. To view the entire panel, which was also aired on C-SPAN in April, click here (you can also access other National Space Symposium videos from this site).

Maj. Gen. Joe H. Engle, USAF (Retired) – Enterprise
“Enterprise was a unique vehicle; she was never intended to into or out of space… She weighed a good deal less than her siblings. Her job was to gather as much aerodynamic data as possible… to check out and modify the flight control system… turned out we did make some rather significant changes… She was to gain flight experience and maturation on flight systems, including auxiliary power systems, hydraulics, computers and controls… We will look back on the Space Shuttle program and we’ll say it was the finest, most capable workhorse in our barn. If we ever build something better than the Shuttle, I’ll eat my words.” Engle showed a video – complete with a bug splat – of the initial Enterprise landing.

Col. Brewster H. Shaw, Jr., USAF (Retired) – Columbia
“Columbia was a tough orbiter…the first launch vehicle of any kind that on its very first flight it carried people to orbit and got them back safely… In first stage, all of the orbiters are pretty much the same… in second stage, it’s this nice smooth push… ( As) the first one designed built, Columbia had about 7,000 lbs. more structure, so it was a very stiff vehicle — just a rock solid thing all the way to orbit – what a great ride! We had to do a lot of maneuvers… 216 over the 10 days… 15,000 keystrokes… We had two computers fail… GPC1 we never got to recover at all, we did get GPC2 to come back online… the inertial measurement unit (IMU) broke… entry was pretty nominal until nose gear hit the ground and GPC2 failed all over again. During post-landing, the auxiliary power units had failures that spewed hydrazine and started a fire… we were burning from about 40,000 feet down… Other than that it was pretty swell. It was a real thrill to fly with Capt. John Young.”

VADM Richard H. Truly, USN (Retired) – Challenger
“Challenger was in the fleet less than three years and flew 10 missions. Her loss changed the course of space history. She launched the first teachers, the first woman in space, the first African American in space and the first untethered EVA. The “first” that meant the most to me was the first night launch and night landing of the Space Shuttle program. The first night landing was a real privilege — it was an opportunity to open a capability for the entire program. Afterward, we redesigned the head’s up display and the lighting system. We ended up with a really simple system made out of automobile headlights — red and white — and big xenon lights down the runway… it was very dim, but you could see… (During entry) the stars went out… and then started changing colors… we were seeing ionized gases in the foot-thick shockwave… at about Mach 7 it was white hot…and suddenly it went away… it was the most gorgeous view of the California coast and in the distance I could see the xenon lights…we landed 50 feet long and half a knot slow from 4,000 miles out. It was a hell of a ride.”

Col. Eileen Collins, USAF (Retired) – Discovery
“Discovery was the fourth orbiter built. Discovery has flown 39 times and the final flight was March 2011. She launched the Hubble Space Telescope, flew the return to flight missions after Challenger and Columbia, performed the first rendezvous with the Russian space station Mir, carried the oldest person into space – John Glenn at age 77, and flew the first cosmonaut on American spacecraft… The orbiters were pretty much the same… the flying qualities were very stable and predictable by the time I flew. The payload affects the weight and center of mass of the orbiter, though, and a pilot can tell the difference. I flew my first and fourth flight on Discovery. STS-63 was my first flight, and it included a close approach to Russian space station Mir… After negotiating with the Russians, the approach plan went from 1,000 to 300 feet and eventually down to 30 feet… An engine was leaking hydrazine, so the rendezvous was cancelled. On flight day four, I realized that the Russians really wanted to do the flight test as much as we did. All the tough negotiating we had done was just part of their culture. Our relationships with our cold-war rivals, while not perfect, are strong. Part of Discovery’s legacy is its role in diplomacy.”

Col. Fred D. Gregory, USAF (Retired) – Atlantis
“Atlantis flew 32 missions and will fly one more time. It took the Columbus Module to the International Space Station, it took Destiny to the International Space Station, it visited Mir seven times. Atlantis set several records… it had the shortest turnaround between landing and launch — 50 days — and had the fewest interim problem reports… It has always been a very clean airplane. Before every flight, I go talk to the main engines… the engines respond to me…it has worked, because I’ve never aborted or had to unload from the orbiter. Atlantis was a beautiful bird… a very, very smooth airplane. I went back and talked to Atlantis about three weeks ago and Atlantis asked me if I had heard that it was going to make its last mission… Atlantis is actually going to be stored at Kennedy after it lands in June. Last thing it said to me was “I certainly hope this is not the last human flight we make in America.'”

CAPT Daniel C. Brandenstein, USN (Retired) – Endeavour
“Endeavour got involved in the STEM* program before the STEM program was a STEM program because there was a program to name the new orbiter given to schools throughout the country. It included not only suggesting a name, but also a science project that would go with it…kids got involved in the orbiter before it rolled out. STS-49 was the first flight… launched in May 1992… the mission was to repair Intelsat… The first time we tried to capture the satellite, we weren’t successful… we did three tries before it was tumbling out of control… The ground crew got the satellite back under control… this time we had six shots before it went out of control again. Teams on the ground took a day off to come up with a new plan…They decided to send three people on an EVA and use good old-fashioned hands to capture it… Three guys grabbed the satellite and put the bar on it, and the satellite is still up there now and working great… Endeavour worked perfectly on its first flight… It’s a true testament to the people who put it together, maintain it and operate it day in and day out.”