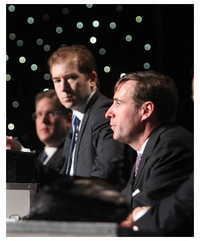 Each year, the National Space Symposium features leaders of major commercial space businesses who discuss the issues they face in managing their companies. The panel this year focused heavily on satellite opportunities with lots of conversation revolving around hosted payloads. The panel included:

Desch, whose company has a constellation of low-Earth orbiting (LEO) cross-linked satellites that provide voice and data services to the Department of Defense, U.S. and international government agencies and areas not served by terrestrial communication networks, said that planning for hosted payloads should provide “interesting opportunities.”

McGlade said that the current environment requires companies to do things differently, noting that Intelsat is moving into hosted payloads, with an FAA satellite on its Galaxy-15 and an IRIS payload on Galaxy-16. He added that Intelsat is also addressing the primary reason satellites retire – fuel depletion – saying that a deal with the Missile Defense Agency (MDA) for satellite servicing involves bringing a tug to geosynchronous Earth orbit (GEO) to re-fuel satellites. “We are also looking at satellite repair capacity,” he said, “For example, a failed satellite could be used to extend the life of another satellite, which would provide time to build another and ensure continuity of service.” Intelsat provides fixed satellite services worldwide for many of the world’s leading media and network companies, multinational corporations, Internet Service Providers and governmental agencies.

Mowry, who heads the world’s oldest satellite launch company, said that 30-year-old Arianespace had 18 launches last year and has set a goal of 36 next year. “We see a lot of growth in hosted payload,” he said. “We are planning a hosted payload mission later in the year, along with the SES New Dawn satellite.”  Arianespace launchers comprise Ariane 5, Soyuz and Vega rockets. The company has launched 290 payloads, including more than half of all the commercial satellites now in service worldwide.

Sukawaty said that over the past 32 years, Inmarsat has evolved from its beginnings as a United Nations mandate into a private enterprise. He said that the company’s three backwards-compatible constellations are planned to last until 2025 and its Global Express constellation will be first global VSAT constellation. Sukawaty said that each of Inmarsat’s three generations of satellites has hosted payloads. “This is an efficient, reliable, low-cost way to get payloads in orbit.”

During the Q&A period, the CEOs commented on the details of managing hosted payloads:

McGlade: “The key is to plan in advance – to look at the size of bus and payload and how much power is required… There are so many opportunities out there, we can always find a hosted payload or SSA option for each satellite.”

Desch: “This is going to be a big thing in the next 10 years, though maybe not the next two to three like it should be. It just takes time. In 2027, when we launch our next constellation, I think we’ll have this all together, and put a lot of payloads up.”

Sukawaty: “Hosted payload is a loosely defined term – it is basically a separate payload… Other hosted payload opportunities could be leases on a beam or a collection of beams – a piece of capacity shaved off. “

Mowry: “The mental framework for this has to change within the government. We need to work on a 24-48 month time horizon, not seven-eight years. We must have secure launch facilities, and must be sure we can protect technology during launch prep. We have to have the ability, if the sensor is a month or two late, to slide the payload to another launch opportunity.”

McGlade: “It’s about taking advantage of multiple customer sets where they can all benefit… But, we have a budget issue… Right now we’re using supplemental budgets rather than a line item, and that has been an inhibitor.”

Sukawaty: “Planning is important and delay is the biggest issue. The specifications have to be nailed down and can’t be changing along the way.”