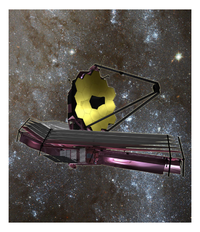 The Senate Appropriations Committee has passed its Fiscal Year (FY) 2012 Commerce, Justice, Science and Related Agencies (CJS) bill, S. 1572, which includes funds for NASA and NOAA. The CJS bill would appropriate $17.9 billion in funding for NASA, which is $800 million less than the president requested for FY 2012. Still, that’s $1.1 billion more than the House CJS bill that passed in July.

In formulating the budget decrease, the Committee recommended funding a number of space programs at equal or lower levels than the president’s FY 2012 request:

In addition, the Senate CJS bill would appropriate $5 billion in spending for NOAA – $463 million less than the president requested in FY 2012. In formulating the budget decrease, the committee recommended funding the Joint Polar Satellite System (JPSS) at $920 million, which is $150 million below request.

The CJS bill now awaits a vote by the full Senate.

James Webb Space Telescope Budget Boost
The FY 2012 funding for the JWST provided for in the CJS bill is $529 million ($155 million above the president’s request) which will enable a 2018 launch. In stating its support, the committee said that last year’s Independent Casani Study found that “NASA has never requested adequate resources to fund” the development of JWST. The Senate Appropriations Committee report stated NASA’s “budget optimism led to massive ongoing cost overruns” and caused the JWST “schedule to slip.” NASA has submitted to the Congress a new baseline for JWST with an overall life cycle cost of $8.7 billion, which includes the cost of operating the JWST for five years after it is launched. The committee said in its report that it “intends to hold NASA and its contractors to” the new baseline and the bill would cap the “overall development costs for JWST at $8 billion.”

The Space Foundation has also has taken a position of strong support of funding for the JWST (pictured); for details, click here.