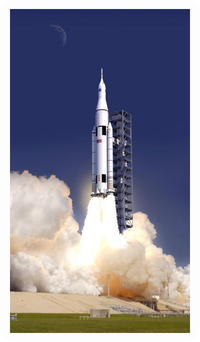 The SLS rocket’s core will be a larger derivative of the Space Shuttle external tank, which will include five Space Shuttle Main Engines (SSMEs) and initially two five-segment solid rocket boosters strapped onto the first stage core.

NASA also announced that, eventually, it will hold a competition to design and develop first stage strap-on boosters, which could be fueled by either solid or liquid propellant. The SLS will feature an improved J2-X engine for the upper stage and a Multi-Purpose Crew Vehicle (MPCV) to carry astronauts.

Pictured: NASA rendering of the SLS