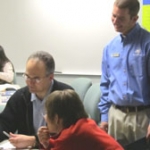 Education Events include Classroom Sessions, Assemblies and Teacher Training
The core of the six-day event was a series of space-themed science presentations at ten local schools. Through a combination of small classroom sessions and large assemblies, Space Education Specialists Gagnon and Molen taught classes on the effects of microgravity, the planets in our solar system, the Kepler mission and its search for planets throughout the universe, life aboard the International Space Station (including a chance to taste astronaut food), Mars and Mars exploration, “build an alien” lessons that address physical influences on biological lifeforms, space careers and a wide variety of exercises that demonstrate phenomena such as how space telescope detect planets, how planets rotate and how rovers explore planetary surfaces. In all, Gagnon and Molen, taught almost 1,500 students, ranging from 2nd to 12th grade.

Teachers Learn to Use Space in the Classroom
On Saturday, Feb. 18, Gagnon and Molen conducted two teacher professional development sessions for the Fairbanks North Star Borough School District. The Space Across the Curriculum workshops, based on the Space Foundation’s more intense week-long Space Across the Curriculum courses, introduced elementary school teachers to astronomy and planetary sciences and junior/senior high school teachers to space technologies, including nanotechnologies. The courses provided teachers with hands-on lessons and activities that they could immediately teach in their classrooms. The training was provided in conjunction with the Fairbanks North Star Borough School District.

Public Events, Media Introduce Community to Space Foundation Programs
During the week, the Space Foundation also participated in a number of public and media events, including a community forum at the Noel Wien Public Library, a table at the Science for Alaska public lecture series, a parent/community reception at Immaculate Conception/Monroe Catholic High School, presentations to both the Chena Kiwanis and the Fairbanks Kiwanis Club and media coverage by the local NBC and CBS television stations and the Fairbanks Daily News-Miner newspaper. In addition, the Space Foundation team toured the University of Alaska Fairbanks (UAF) nanotechnology lab as the guests of Drs. Shiva and Nulima Hullavarad, who are both research assistant professors – Advanced Materials Group at the UAF Institute of Northern Engineering.

Photos
For photos of the week-long event, click here.