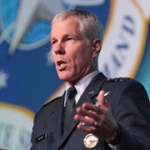 In his April 17 remarks before a capacity audience at the 28th National Space Symposium, Gen. William L. Shelton, USAF, commander, Air Force Space Command (AFSPC), highlighted accomplishments of AFSPC’s 30-year history, saying “Moving from a time when space was a ‘nice-to-have’ with a strategic-user emphasis, to being a vital force multiplier across the entire joint force, space capabilities are now indispensable not only to our nation’s defense, but to our national economy as well.”

Among the highlights Shelton mentioned were:

Speaking about the budget, Shelton said the future of AFSPC is heavily dependent on budgetary considerations. “After we look at all the puts and takes… the real decrease in the FY13 Air Force space budget portfolio was only 1.5 percent,” he said, demonstrating “commitment to foundational space capabilities as a critical aspect of the nation’s defense.” He then outlined additional AFSPC missions supported in the new budget:

Shelton said the future vision for AFSPC is focused more on information than platforms. “We now take for granted that we’ll have speed-of-light access to data wherever we are for warfighting purposes,” said Shelton. “But it’s just spam if you can’t act on the data provided and turn it into decision-quality information.”

« Thuraya to Participate in 28th National Space Symposium in US