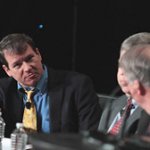 Two satellite industry panels were held during the 28th National Space Symposium on Wednesday morning, April 18. Both were hosted by Space News Editor Warren Ferster. The Part I covered:

David Bernstein, senior vice president – program management, Space Systems/Loral: The commercial satellite business is solid and the marketplace looks good for moderate growth. Even though sequestration won’t directly affect the commercial business, it will affect suppliers, which will have an impact. ITAR is a daily issue that we’ve learned to deal with; it’s just a part of doing business. But, we’d love to see it changed and satellites moved back to commerce. As a commercial contractor, we are on our own for R&D, so we plough our own profits back in for innovation, improvements and development.

Jeffrey D. Grant, sector vice president and general manager – space systems, Northrop Grumman Aerospace Systems: The market looks flat over next few years; we are dealing with this by focusing on affordability and manufacturing efficiencies. There is potential damage of sequestration to the satellite manufacturing industry – the process of slowing, stopping and restarting can be very damaging. As advanced AEHF enters the production phase and there are fewer new projects, we risk losing skilled R&D employees. Currently, we are dealing with it by assigning them to adjacencies, but long term, this could be an issue. Consolidation makes more efficient use of limited resources.

Maj. Gen. Craig Cooning, USAF, Ret., vice president and general manager, Boeing Space and Intelligence Systems: We are making up for decline in defense business with increases in commercial business, including hosted payloads. No one wants sequestration, but we believe that sanity will creep back into the process. WGS is more aligned with the commercial marketplace, which has made the program less expensive and more robust. Industry needs to work hard to pull down the recurring cost of satellites to create headroom for more R&D. We think the administration is moving in the right direction with ITAR reform.

Frederick J. Doyle, Jr., vice president and corporate lead executive for the defense and intelligence community, Ball Aerospace & Technologies Corp.: We’re trying to make the sequestration issue “very personal,” by addressing potential jobs lost. Ball made a concerted effort to get close to customers who have research dollars, so we are engaged with many research organizations and serve as a transition partner. There is always a risk that the small will be eaten by the big, but we like to look at it as “the fast will eat the slow.”

Mark Valerio, vice president and general manager – surveillance and navigation, Lockheed Martin Space Systems: A diverse portfolio helps to level the work and revenue; our focus is also affordability and efficiency. GPS affords an opportunity to produce a large number of satellites, which will create economies of scale and a better supply base. The Air Force’s back-to-basics approach has created a few upfront issues because suppliers haven’t wanted to supply parts for testing, but the upfront testing will pay huge dividends. We now insert capability when it is ready; in the past we have had issues when we have tried to introduce technology before it’s ready. Current environment is similar to the 90s, which would indicate that there will be industry consolidations.