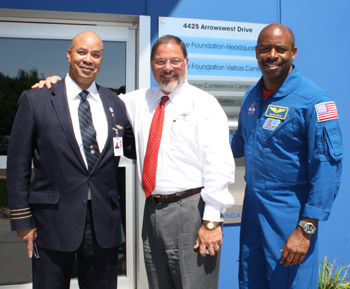 A diverse background in materials science engineering, professional football and as an astronaut led Leland Melvin to his current position as NASA Associate Administrator for Education. Recently, he traveled to Colorado Springs on an educational tour hosted by the non-profit organization Shades of Blue, which encourages students to explore careers in the aviation and aerospace fields.

Before touring Space Foundation headquarters, Melvin visited the Space Foundation Discovery Institute in Colorado Springs and spoke to students at the Jack Swigert Aerospace Academy. His presentation emphasized the importance of education and the commitment it takes to make personal dreams a reality.

Melvin joined NASA in 1989 as a research engineer and entered the astronaut corps in 1998. He flew on two Space Shuttle missions and operated the Shuttle’s robotic arm on missions to the International Space Station in 2008 and 2009.