Individual tickets are still available for The Space Foundation Presents a 30th Anniversary Salute to Air Force Space Command, which will celebrate the history and contributions of the Air Force Space Command and its 30-year heritage in the Pikes Peak community. Tables sold out in early August for the Sept. 14 event at The Broadmoor Hotel in Colorado Springs, Colo.

Blue Steel, the United States Air Force Academy band, will provide entertainment. The reception begins at 6:00 p.m. and dinner is at 7:00 p.m. 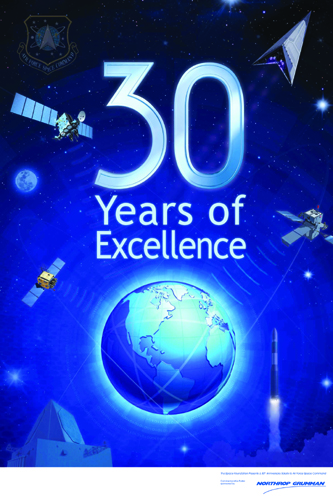 All Guests to Receive Commemorative Poster, Courtesy of Northrop Grumman

Attendees will each receive a commemorative Air Force Space Command 30th Anniversary poster, created for AFSPC by artist Richard Green (you may know him from his spectacular National Space Symposium posters) and printed by the Space Foundation with funding from Platinum Corporate Member Northrop Grumman.

Registration rates for active military are tiered by rank to allow for a larger number of attendees; the costs are being underwritten by table sales.