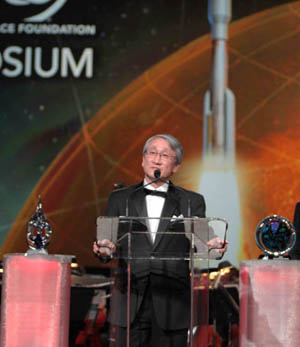 The Space Foundation is now accepting nominations through Oct. 31 for three annual space awards to be presented at the 29th National Space Symposium, April 8-11, 2013, at The Broadmoor Hotel in Colorado Springs, Colo.

The Space Achievement Award
The Space Achievement Award is presented annually to an individual or organization for significant contributions in advancing the development or utilization of space. To be eligible, the nominee must have made a major contribution to space, such as releasing a new technology, significantly improving the performance or capabilities of an existing technology, creating new opportunities for space employment or advancement, or significantly advancing or improving space policy within the 2011-2012 timeframe.

To Submit Nominations
The general public may submit nominations until Oct. 31, 2012, to [email protected] Please include details about why the nominee should be considered and contact information for the person submitting the nomination.