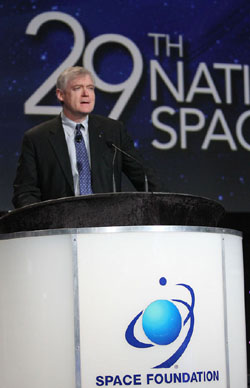 The Space Foundation’s 29th National Space Symposium brought together senior state officials from across the United States. In addition to speaking at and participating in the Space Symposium, they also gathered to attend a meeting of the Aerospace States Association.

Alaska Lt. Gov. Mead Treadwell spoke at the Space Symposium and emphasized the important role of state government in the future of space.