In 2006, Anousheh Ansari captured headlines as the first female private space explorer, the fourth private explorer to visit space and the first astronaut of Iranian descent. 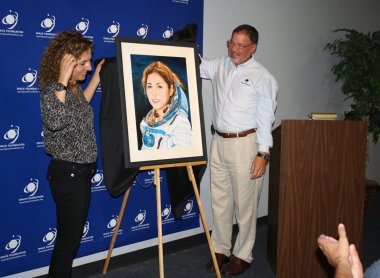 In August, Ansari visited the Space Foundation Discovery Center in Colorado Springs to unveil her portrait on display in the gallery, and to sign autographs for the public.

A group of families and fans gathered at the Discovery Center for Ansari’s inspirational talk about not abandoning childhood dreams of traveling in space.

She said she had always wanted to go to space ever since she was a young child in Iran. She said she would go outside at night to stare at the stars and imagine what it would be like to leave Earth.

She spoke about the challenges of training for space and how much she enjoyed the experience of being in space, saying she loved the feeling of weightlessness, in spite of some initial motion sickness.

Learn more about events and exhibits at the Space Foundation Discovery Center here.