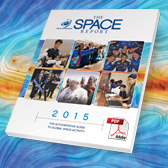 Following are some of the facts and analyses found in The Space Report 2015:

About the Website
Beginning in September 2015, the Space Foundation will offer an online service that will provide subscribers with access to all the research conducted for The Space Report dating back to 2005, as well as new data sets that have never appeared in the report. This website will provide users with updates throughout the year, customizable chart and downloadable data for further analysis. To view more information about this new service, visit www.TheSpaceReport.org.

The Space Report 2015 is on Sale Now
The Space Report is the definitive body of information about the global space industry. It is a valuable resource for government and business leaders, educators, financial analysts, students and space-related businesses. The report can be purchased as a downloadable PDF for $399. A website subscription can be purchased for $3,500. The subscription includes the ability to download every published edition of The Space Report. Purchases can be made online at www.TheSpaceReport.org.