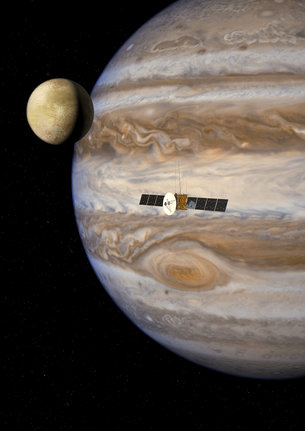 The European Space Agency (ESA) is planning a mission to observe Jupiter and three of its largest moons, Ganymede, Callisto and Europa. The mission’s name: JUipter ICy moons Explorer, or JUICE.

JUICE will be the first large-class mission in ESA’s Cosmic Vision 2015-2025 program. The mission is expected to take about eight years to arrive at the gas giant with a planned launch occurring in 2022. France-based Airbus Defense and Space has been selected as the prime industrial contractor for JUICE.

Once JUICE arrives at Jupiter, it has a planned three and half year journey around Jupiter and will receive gravity assists from Callisto and Ganymede to modify the trajectory throughout the mission. The spacecraft will feature cameras, spectrometers, an ice penetrating radar, an altimeter, radio-science experiments and sensors used to monitor magnetic fields and plasma environments.

JUICE hopes to learn more about the turbulent atmosphere, gigantic magnetosphere and dark rings of Jupiter as well as gaining more knowledge about the planet-sized moons which are suspected to have oceans of liquid water hidden beneath their icy crusts.