Op-ed: Lessons from Apollo – Building the Teams that Make History 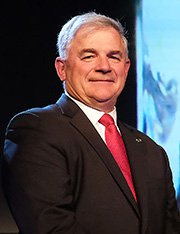 Today, the Colorado Springs Gazette published an op-ed by Space Foundation CEO Tom Zelibor, “Lessons from Apollo — Building the Teams that Make History.” The op-ed credits the success of the Apollo 11 Moon landing 50 years ago to the teamwork of the hundreds of thousands of people who worked on the mission.

In the op-ed, Zelibor makes the point that building teams for our current space era starts in the classroom with educators who can help students learn to work cooperatively to solve complex problems. Through its education programs, the Space Foundation is building the next generation of space leaders and improving the overall quality of education through teacher, student and community programs that use space themes to improve students’ interest and skills in science, technology, engineering and mathematics (STEM). Learn more about Space Foundation STEM education outreach here.

Bold visions: Building the teams that can make history

The people who make history are the ones who break barriers and cross a new finish line first. So it was in the Apollo era, when the names Neil Armstrong, Edwin “Buzz” Aldrin and Michael Collins were forever etched onto history’s pages. Those July days 50 years ago were momentous, but if you asked those three legendary explorers what it was like to make history, each would tell you that they did not get there alone.

It took hundreds of thousands of dedicated, brilliant people to send those three men to the Moon. The crew of Apollo 11 were just the people fortunate enough to carry all of that work forward.

Bold visions are a dime a dozen. Bold accomplishments are rare because they take many people and many resources working in concert to turn aspirations into reality. Our history as Americans encourages us to put vision into action and to draw on the full innovative, exploratory capacity of this country to make big things happen.

Bigger and bolder futures have always been our metrics for national success. It’s one of the reasons President Kennedy’s “Moon speech” at Rice University in 1962 resonates so strongly almost 60 years later. It reminds Americans of a time when we dreamed boldly and mobilized our best and brightest to quickly take on the tough jobs to put us where we wanted to be — and to do it before anyone else.

The lessons the Apollo team gave us in terms of facing challenges, overcoming failures and accomplishing the impossible became galvanizing forces that solidified what we today call “The American Century.” Indeed, every American, every industry and every continent were impacted by the “small steps” of the lunar explorers. Every infrastructure and facet of life, from agriculture to manufacturing, education to health care and more changed for the better because of the rich talent that made Apollo possible. Even today, we continue to reap the rewards of those successes.

The Apollo team taught us we must always be looking to the horizon for the next challenge, adventure and opportunity — which is why building the next great generational team needs to be the goal that comes from all of our Apollo celebrations. As much as space travel has been about the select few of us that go “out there,” the truth is the rewards “back here” are the guaranteed dividends that forging the next generation of explorers gives us.

Today, competition in the space market is at its most intense level ever. It is a new era of space access, with companies competing alongside countries to hold the higher ground. These same forces are also competing for the talent that can take them (and us) to those lofty points. And in the balance sheet of national priorities, it is far past time for us to view space as an investment always worth making. The same metric applies to building the teams that are part of those investment strategies, whether they work in the public or private sectors.

Building these teams begins in classrooms with talented educators that empower students to think creatively and cooperatively to solve complex problems. They extend into laboratories and test ranges where new ideas are tried and tested. They reach into boardrooms where tough decisions are made on what to support. Team building for space is appreciating and inviting the “outsider” who challenges the status quo and offers a new, innovative path forward. When these things come together, history is made.

No one goes to space alone, and collaboration in our new space era is what will permit us to break new barriers and explore new lands.

Neil, Buzz and Mike showed us what happens when thousands of people join their efforts. They got to the Moon, but it was a team that made it possible.

Fifty years later, that’s something worth remembering, celebrating, and honoring as we seek the next small steps and giant leaps to the stars.