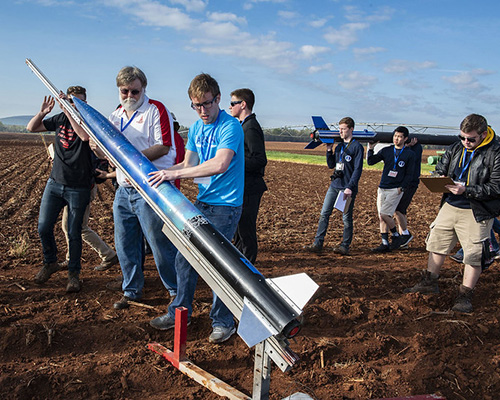 Students in middle, high school, and college participated in NASA’s Student Launch in April 2019. Despite hands-on learning such as this, global test results analyzed by the Organisation for Economic Cooperation and Development show that overall, only 54% of students tested were proficient in math and in science. Credit: NASA/Fred Deaton

COLORADO SPRINGS, Colo. (Oct. 31, 2019) — Revenues from global commercial space activity in 2018 climbed to their highest level ever and now make up nearly 80% of the total global space industry, according to new findings from The Space Report Quarter Three.

The Space Foundation published the third quarter 2019 issue of The Space Report today and shared other key findings:

The recent success of commercial space activity can be traced back more than 13 years, when U.S. government leaders and business entrepreneurs realized that vast opportunities — in economic development, technological advancement, and scientific knowledge — awaited in space.

New federal legislation, the Commercial Space Launch Amendments Act, was passed in 2004, the same year SpaceShipOne successfully completed the first privately crewed spaceflights in history. Those two events helped trigger a new era of commercial enterprise. From 2005 to 2018, according to The Space Report, commercial space revenue more than doubled, growing 162%.

The Space Report is widely recognized as the definitive body of information about the global space industry. It contains worldwide space facts and figures and is illustrated with photographs, charts, and graphs detailing the benefits of space exploration and utilization. The report is a resource for government and business leaders, educators, financial analysts, students, and space-related companies.

Its analysis also extends to the education and workforce issues that will shape current and future endeavors in space. For the third-quarter issue, The Space Report also examined global and national test results for science, technology, engineering, and mathematics (STEM) subjects. Among the findings:

The Space Foundation’s Research & Analysis team produces The Space Report and earlier this year transitioned from an annual summary to quarterly updates of global space activity.

The Space Report is available for purchase by the public for $250 per quarter or $499 for all four quarters at www.thespacereport.org/pricing. The full PDF is also available to subscribers of The Space Report Online. The online subscription also provides members with searchable access to all the research conducted for The Space Report since 2005.

Media interested in purchasing The Space Report should contact the Space Foundation at [email protected] for a discount code that will allow you to receive all four quarters for $99 annually.

« Space Foundation Announces Changes to Its Board of Directors