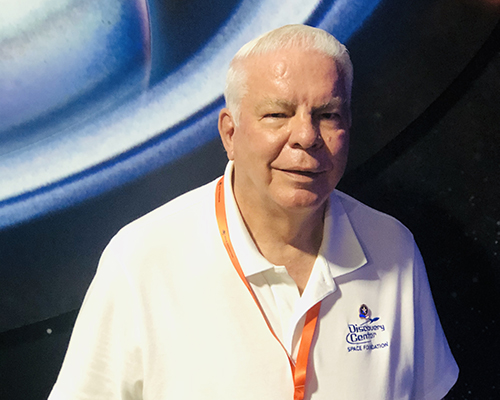 These Volunteer Spotlight articles profile some of the interesting and dedicated people who make Space Foundation programs possible. We could not do the work that we do without the generous and tireless support of our volunteers. This week, we are featuring Space Foundation Discovery Center volunteer Bill Furch.

Bill grew up in Littleton, Colorado, and after graduating from Littleton High School, he attended the University of Denver, where he graduated with a Bachelor of Science in Electrical Engineering. He later worked for Sperry Flight Systems in Phoenix, Arizona, where he helped design avionics for military jet aircraft such as the F-15, and he also served as a flight test pilot during the Vietnam War. He moved to Colorado Springs, Colorado, in 1973 to work for Hewlett Packard, where he helped design computer hardware test equipment such as the Oscilloscope and Logic Analyzer. He retired in 2013. He and his wife Karyn have three daughters and five grandchildren.

Furch is a volunteer docent in the Space Foundation Discovery Center. Sharing a personal story on mentorship and how he hopes to influence young people who visit the Discovery Center, Bill said, “When I was in eighth grade, I visited my uncle who was an engineer for Lockheed in Burbank, California. He worked in the ‘Skunk Works’ and helped design the SR-71, the F-117, and a few rockets. He asked me what I was going to do with my life. I said, ‘I don’t know, haven’t thought much about it.’ He said, ‘Have you thought about being an engineer?’ I said, ‘What do they do?’ He told me, and then said he thought I had the right aptitude for it. At that very moment I decided to be an engineer. It wasn’t easy, but just having an adult at that point in my life to encourage me was all it took. So, I hope that at the Discovery Center I can be that encourager that will move a young person forward to their next stage in life as an engineer, astronaut, or scientist.”