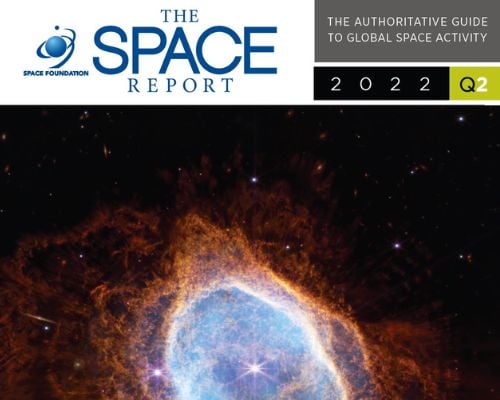 COLORADO SPRINGS, Colo. — July 27, 2022 — Space Foundation, a nonprofit advocate organization founded in 1983 for the global space ecosystem, today released The Space Report 2022 Q2, compiling data from nations around the planet to calculate the $469 billion space economy, which grew at a brisk 9% clip from 2020.

Most of the money generated by the space industry came in the commercial sector, which saw a 6.4% boost in revenues, with more than $224 billion coming from products and services delivered by space firms and nearly $138 billion spent on infrastructure and support for commercial space enterprises. Part of the increase comes from an overall 19% boost in government spending on military and civil space programs, including an 18% increase by the U.S., an estimated 23% increase by China, and a 36% boost by India.

The Space Report offers a detailed look at spending by major spacefaring nations and a regional examination of space revenue from Europe, Latin America and Africa. The Space Report also offers a deep dive into the booming commercial space industry, examining which segments are cashing in, how investors are approaching space, and how space firms are faring on Wall Street.

The Q2 edition also looks at the record pace of successful launches from Jan. 1 to June 30, with 72 rockets inserting 1,022 identified spacecraft into space. That is more spacecraft attaining orbit in just six months than were launched in the first 52 years of the Space Age. Most of those new satellites came from the commercial sector, which launched 958 spacecraft in the first half of 2022.

“The incredible growth of the global space economy is a testament to the talented professionals who innovate new ideas for space every day to help humanity and the ever-growing reliance on those benefits from space for all the people of Earth,” said Space Foundation CEO Tom Zelibor. “The booming space industry will need to expand its workforce to sustain this kind of growth. That means delivering the message to everyone, from kindergarten on up, that they have a place in space at one of the most exciting times since we first reached for the stars.”

Part of that excitement comes from the first images released by the James Webb Space Telescope (JWST). Several experts outline the potential of Webb in the Q2 edition, including how it can peer through 13.5 billion light-years of space to examine the time called “cosmic dawn,” when the first stars were born. Closer to home, the JWST can also examine planets orbiting nearby stars to determine the chemistry of their atmospheres, allowing scientists to learn more about the building blocks of the galaxy and possibly spot habitable planets where life could form or exist.

Getting to distant stars, or closer destinations including Mars, will require new forms of propulsion through space and new ways to power humankind’s first permanent outposts far from Earth. To fill both requirements, NASA is looking at new advancements in an old technology: nuclear fission. Experimental gas-cooled reactors are in the works, which include new fuels coated in exotic materials, such as artificial diamonds, to withstand high temperatures. NASA leaders say atomic propulsion could halve the time it takes to reach Mars, and small atomic power stations could deliver electricity on the Moon and Mars for years with little or no maintenance.

The Q2 edition also offers an analysis of hypersonic missile development, and the role space assets will play. Russia’s invasion of Ukraine saw the first acknowledged battlefield use of hypersonic weapons, stealthy missiles that travel at more than five times the speed of sound and slip through American defenses designed to spot and track intercontinental ballistic missiles. That has driven the Pentagon to purchase a new constellation of satellites to spot hypersonic weapons and develop new defenses, which could include satellites to knock down the weapons. The weapons have also driven policy debate about the hypersonic arms race and whether international pacts could curb the use of hypersonic missiles. 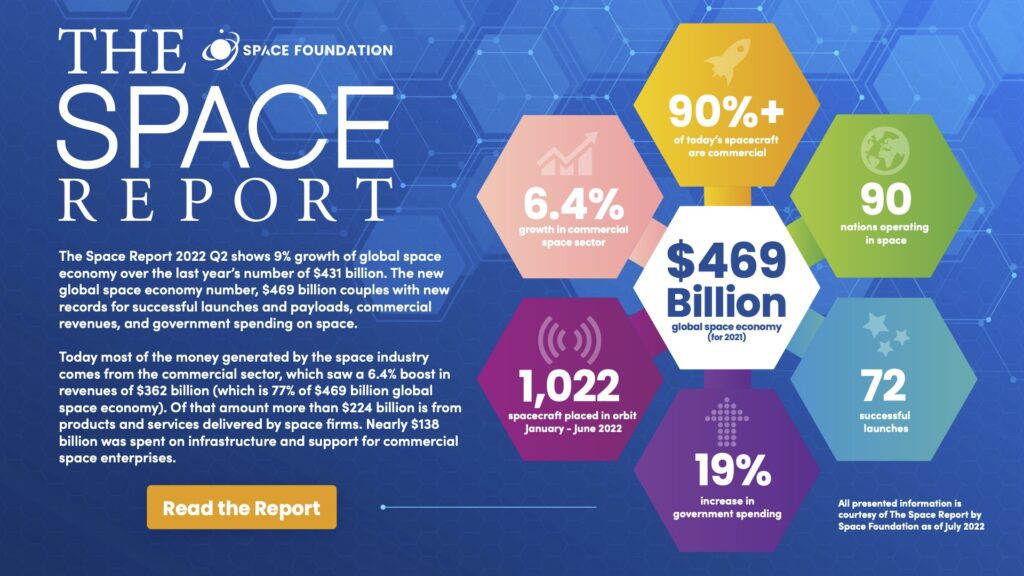 The Space Report is the authoritative report on the global space ecosystem, covering space exploration and space-inspired industries on Earth. Published by Space Foundation since 2006 and operating under Symposium 365 division, The Space Report is available on a subscription basis, providing policy analysts, congressional staff, investors, media, and space industry newcomers with research and insight on trends and opportunities with informative articles and quarterly reports. Highlighting each report is an overview of the latest data available on the space economy, space infrastructure, and other key industry indicators as well as analysis of commercial, government and educational events impacting business, workforce and our daily lives.

« Ball Aerospace and Seagate to Collaborate on Data Storage in Space