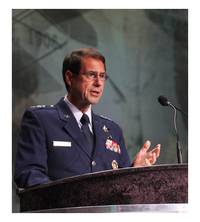 Sheridan said Air Force Space Command is improving the space acquiistion process. “We have 200 new hires we need to train and put to work in the programs,” he said. “And we’re putting four new satellites into space this year, I can’t think of the last time we did that.”

He also recommended the book, A Fiery Peace in a Cold War: Bernard Schriever and the Ultimate Weapon, by Neil Sheehan for insight into how acquisition could be run. “Schriever started with a small team, but was great at drawing expertise from them,” he said. “He gave program leaders the freedom to decide how they ran their programs. Despite criticisms and launch failures, he persevered.”