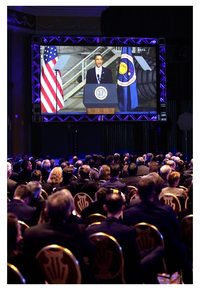 One of the hottest topics at the 26th National Space Symposium was the controversy swirling around President Barack Obama’s FY2011 budget proposal for NASA (see President Obama’s remarks here; see related Space Watch articles of NASA Administrator Charles Bolden’s remarks and on the NASA – The Budget and The Way Ahead panel here).

When asked if the President changed hearts and minds with his address, Levin said that he felt that he did, although he wasn’t sure if his remarks signalled change.”Whenever the President speaks, he presents his case well,” said Levin. “At the end, he (Obama) addressed why we spend money on space – explaining that it’s part of what makes up the fabric of our nation.”

Walker said that he felt the remarks “caused people to think more about their positions, even if their minds weren’t changed,” adding, “The public wants to maintain (U.S.) leadership in space.”