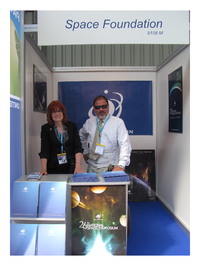 The largest meeting of the aerospace industry in Europe, ILA is also the world’s oldest aviation show, dating back to 1909. Organized by BDLI and Messe Berlin GmbH, ILA is held every two years and includes a trade fair, conferences, and a display for the public covering all aspects of aviation and space flight. ILA 2010 had the largest participation in the show’s 100-year history, with 1,153 exhibitors from 47 countries and approximately 235,000 visitors.

ILA’s Space Day, held on June 10, was attended by some 250 delegates, including leading representatives of space agencies from the USA, Russia, Ukraine, and Kazakhstan.

According to the show organizers, contracts and business agreements with a total value of at least $16.5 billion were signed during the event.

During the event, the Space Foundation participated in a number of group events and meetings with representatives of major European space organizations, including BDLI and DLR.

“The size and scope of the Space Hall and the impressive ‘Space for Earth’ exhibit underscored the growing importance of space in the world aerospace industry,” said Pulham. “We recognize how important it is to establish a strong Space Foundation presence wherever the leaders of the industry gather. ILA was a superb opportunity and a great experience.”

The next ILA will take place from June 12-17, 2012, on a new exhibition site on the western part of the future Berlin Brandenburg International Airport (Schönefeld-West). For more information, click here.