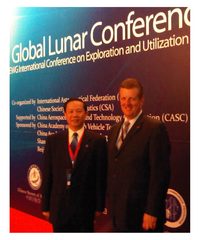 Space Foundation Senior Vice President, Strategic & International Affairs, Steve Eisenhart traveled to China in June to attend a number of significant space events. While in Beijing, he participated in the Global Lunar Conference sponsored by the International Astronautical Federation (IAF) and the Chinese Society of Astronautics (CSA).

The conference featured a series of plenary sessions, speakers, presentations, and networking events focused on all aspects of exploration of the moon, including technical discussions, policy, public outreach considerations, and societal benefits. More than 300 delegates from 26 nations attended.

During his time in China, Eisenhart met with officials from CSA, Chinese space industry leaders, the NASA Pacific Rim liaison, and senior leadership of the Asia Pacific Space Cooperation Organization (APSCO). He was also honored with a dinner hosted by the head of China Manned Space Flight, Wang Wenbao, and attended by Chinese astronaut Yáng Lìwěi  (both of whom spoke at the recent 26th National Space Symposium), and other Chinese space officials.

During the 26th National Space Symposium, the Space Foundation and CSA signed a memorandum of understanding (MOU), establishing a “mutually beneficial relationship” between the two organizations.

The MOU signing resulted from nearly a year of interaction between the two organizations, including a trip by a Space Foundation delegation to China, and a CSA visit to Space Foundation headquarters in Colorado Springs. The MOU provides guidelines for continuing the relationship, such as agreeing on expanded collaboration on space education, research, outreach, and future events. Eisenhart’s trip last week was part of that agreement.