The report of global space activity during 2015 is now available online and in The Space Report 2016  PDF. Data in The Space Report 2016 includes the global space economy, which totaled $323 billion worldwide in 2015. The report explains that the decline from $329 billion in 2014 was due primarily to the strengthening dollar, meaning that non-U.S. government budgets and industry revenues appeared smaller even though most experienced growth in their own currencies.

With a total of $246 billion, commercial space activities made up 76 percent of the global space economy. The U.S. government spent $45 billion on defense and non-defense space efforts in 2015, a 3 percent increase from 2014. 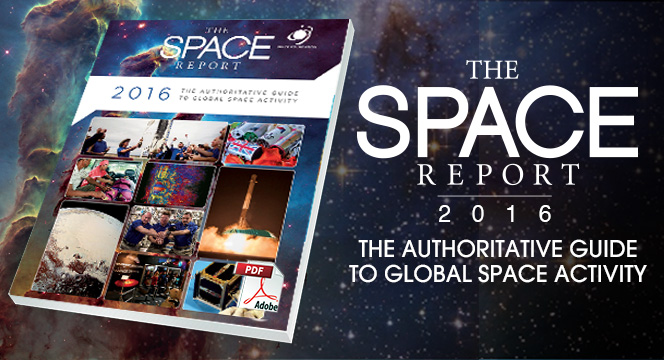 Non-U.S. government space investment declined by 14 percent in dollar terms, primarily due to exchange rates, to a total of $32 billion in 2015. In reality, most countries increased their budgets for space activities.

About the Website
The Space Foundation offers an online service that provides subscribers with access to all the research conducted for The Space Report dating back to 2005, as well as new data sets that have never appeared in the report. This website provides users with updates throughout the year, as well as customizable charts and downloadable data for further analysis. To view more information about this service, visit www.TheSpaceReport.org.

The Space Report 2016 is on Sale Now
The Space Report is the definitive body of information about the global space industry. It is a valuable resource for government and business leaders, educators, financial analysts, students and space-related businesses. The report can be purchased as a downloadable PDF for $399. A website subscription can be purchased for $3,500. The subscription includes the ability to download every published edition of The Space Report. Purchases can be made online at www.TheSpaceReport.org.