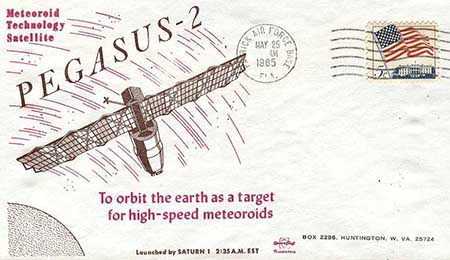 One very early morning in May 1965, fire emerged from the Earth and disappeared into Florida’s night sky. The fire, a Saturn I rocket launch plume, propelled an unmanned payload for NASA’s Apollo program into space.

There were genuine fears within NASA that if micrometeoroids of particular sizes and speeds hit future manned Apollo spacecraft, extreme, or possibly even fatal, consequences might occur from their impact. More information was needed, and the Pegasus satellites helped gather crucial data through collecting and measuring impacts from micrometeoroids. Pegasus was important to NASA’s engineers and astronauts, helping them collect information about micrometeoroids in zones of space in which the Apollo missions were to be conducted. Pegasus I had been launched into orbit earlier in the year and was already collecting micrometeoroid impact data.

Before its launch, the Pegasus II was placed underneath and behind a boilerplate (mock-up) command module, nested inside the Apollo boilerplate service module. The Saturn I launched into the precise pre-determined orbit, with the boilerplate modules ejecting, as planned, into a separate orbit. Pegasus II, exposed once the service module was ejected, unfolded its two wings. Completely unfolded, the wings provided about 200 square meters (2,300 square feet) of surface area filled with instruments to catch and measure impacts of micrometeoroids. The wings could heal from the impacts, allowing the satellite to continue measuring meteoroid impact frequency and penetration power, meteoroid sizes, and meteoroid flight direction.

While the May 25, 1965, launch was quick, praised as “a lesson in efficiency” by Wernher von Braun, the mission itself lasted a little over three years. The gathered data exceeded the Pegasus II mission goals, providing not just micrometeoroid impact data, but also information about how long spacecraft structures and components survive in space, the Van Allen belts, space radiation, and more. All of the Pegasus missions’ efforts and data were used to design equipment and inform engineering of future Apollo missions and future endeavors such as SLS. Ultimately, 65,000 hours of Pegasus data provided confidence to NASA engineers that meteoroids in certain zones of space  above the Earth posed a minimal threat to satellites or manned spacecraft traversing the same space.

On Nov. 3, 1979, nearly 14.5 years after its launch, Pegasus II finally reentered Earth’s atmosphere the way it left — on fiery wings.