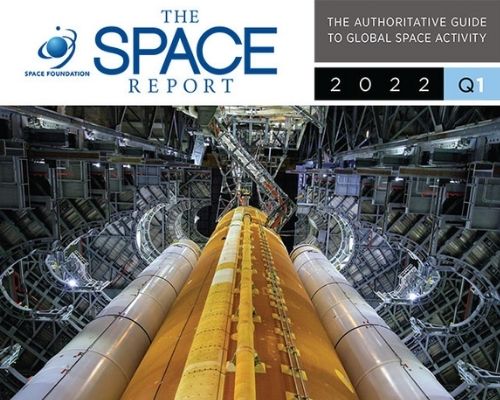 In a three-part analysis, the Q1 edition focuses on U.S. workforce data, the concern among space industry leaders and educators about the supply of skilled workers, and a Space Foundation program that exemplifies efforts to spur students’ interest in science, technology, engineering and mathematics (STEM).

“One thing business leaders and educators readily agree on is that if we are to have sustained growth in the space industry, we must have an uninterrupted pipeline of talent,” said Space Foundation CEO Tom Zelibor. “The jobs available in the global space ecosystem are becoming more varied and increasingly technical in nature and are destined to help create new products and services both in space and on Earth. If we are to realize that growing potential, we must have the talent pool to get us there.”

The workforce section also updates information on pay in the space sector. In 2020, the latest available year for annual data, the average U.S. private-sector space salary was $125,214, according to BLS data, which was more than double the average annual salary of $62,247 for all U.S. private-sector jobs and 27.3% more than the average salary of $98,340 for STEM occupations. Job growth and higher-paying salaries, however, aren’t doing enough to attract workers into the skilled labor jobs that support some crucial jobs in the space industry. Enrollment at two-year U.S. institutions has declined steadily since 2018 in fields such as engineering and science technicians, engineering, and precision production.

The Q1 edition also offers an overview of the 15 launch vehicles expected to debut this year, making it the busiest debut year in space history. The United States leads the class of 2022 with five new launch vehicles, and four of them provide the highest payload capabilities, ranging from 30 to 110 tons. A sixth U.S. company, Blue Origin, announced in late March that it was pushing the launch of its New Glenn to 2023. China is next with three new launch vehicles, followed by the United Kingdom with two new vehicles.

The Q1 edition also examines the climbing rate of launches at U.S. spaceports. Last year, they experienced the busiest year since 1967, helping set a 2021 record of 145 global launch attempts by contributing 45 launches. That increasing rate comes with usage limitations. Of the 13 Federal Aviation Administration (FAA)-licensed launch sites in the U.S., only four are operational and licensed for vertical, orbital launches. Two of these launch sites — Cape Canaveral and Vandenberg — account for 97% of all domestic orbital launches since 1957. In this article, Quilty Analytics examines how some spaceport development faces congressional spending limits and update some of the new development in progress.

An often-overlooked aspect of the space economy and infrastructure gets a look in the Q1 edition, too. Coming off the best year for the space insurance industry since 2016, insurers are bullish on the future with an anticipated boom in satellite and launch policies ahead. Increasing congestion and debris in low Earth orbit could add risk, driving some concerns. However, insurers are beginning to navigate what policies and premiums could be as more tourists head into orbit and firms begin construction on the first commercial space stations.

The Space Report is the authoritative report on the global space ecosystem, covering space exploration and space-inspired industries on Earth. Published by Space Foundation since 2006 and operating under Symposium 365 division, The Space Report is available on a subscription basis, providing policy analysts, congressional staff, investors, media, and space industry newcomers with research and insight on trends and opportunities with informative articles and quarterly reports. Highlighting each report is an overview of the latest data available on the space economy, space infrastructure, and other key industry indicators as well as analysis of commercial, government and educational events impacting business, workforce and our daily lives. For more information, please visit www.thespacereport.org.

Symposium 365, a division of Space Foundation, is the premier source for media and events in the global space ecosystem, offering authoritative news and information and venues for