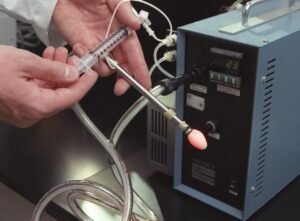 One of NASA’s life science research goals is to better understand plant growth in microgravity. NASA found that it was difficult to use traditional plant growth light sources in space because they require considerable power and turn much of it into heat. This means that the experimental system has to have good controls to eliminate temperature variance that could affect plant growth results. The Wisconsin Center for Space Automation & Robotics proposed using light emitting diodes (LEDs) as the photon source for plant growth experiments conducted in space. This idea generated considerable discussion, as the prevailing view among experts was that LEDs could not provide the necessary wavelengths and intensities needed for photosynthesis. The Wisconsin group teamed with Quantum Devices, Inc. to develop an LED system that was successful in supporting photosynthesis.

The Wisconsin Center then produced the Astroculture3, a plant growth chamber that incorporated the LED light source and has flown on 7 shuttle missions. An ongoing medical objective is to find better ways to remove cancerous tumors. A promising mechanism for treating inoperable tumors is to use light-sensitive, tumor-treating drugs. This Photodynamic Therapy (PDT) approach allows physicians to activate the drug only in the tumor. The most common used light source to activate a tumor drug is a laser. The problem with a laser is that it is expensive, bulky, and somewhat unreliable in a surgical environment. What is needed is a small, highly reliable light source that could provide specific energies and intensities. A NASA Small Business Innovative Research award was given to Quantum Devices, Inc. and Harry Whelan, MD to develop an LED light source that could be used in a surgical environment as the photon source for PDT. As a result of over 5 years of intensive research and experimentation a functioning LED probe has been developed and has received FDA approval for use in patients who exhausted all other means of treatment.

To date the LED treatment has focused on skin cancers and brain tumors. Several successful cases have been reported. Another NASA need has led to yet another possible application for the use of LEDs. In microgravity wounds heal much more slowly. The Wisconsin team has conducted experiments that demonstrate that LEDs have help human-cell cultures grow 5 times faster than normal. These results have led to a research program that is testing LEDs capability to increase wound healing. If the experimental results are promising, human clinical trials will follow. The outcome could be a new medical instrument that can used on long duration space flights to treat astronaut’s wounds as well as having a new technology on Earth to treat burns, sport’s injuries, etc.