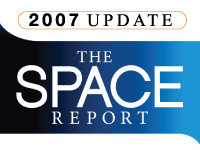 The signature product of the Space Foundation’s Research & Analysis division, The Space Report 2007 is an update of The Space Report 2006. This groundbreaking, peer-reviewed document pioneered a new model for understanding the space industry by expanding the traditional three-sector model – civil, commercial, and national security space – into a more precise and comprehensive nine-sector model based on the end use of space products, systems and services.

The Space Report 2007 contains data showing that nearly every sector of space experienced growth in 2006. Satellite based products and services and U.S. government space investments comprise the two largest segments of the space industry at 50 percent and 28 percent of total revenues, respectively.

Following two successful years of producing the annual “report card on the space industry,” the Space Foundation will release The Space Report 2008, another robust, content-rich report on the state of the space industry, in April 2008. This document, containing data for calendar year 2007,will be streamlined for ease of use and will be structured around condensed, updated and more user-friendly reports and analyses. The printed report will be augmented with charts, data, and analyses that will be published as online adjuncts to the printed report. The Space Report 2008 will be released in conjunction with the 24th National Space Symposium, April 7-10 at The Broadmoor Hotel in Colorado Springs, Colo.

« Largest Ever Strategic Space and Defense 2007 Set to Begin