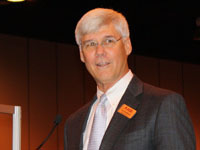 COLORADO SPRINGS, Colo. (Nov. 2, 2009) — The Strategic Space Symposium got off to a grand start on Nov. 2 with an Oktoberfest-themed Opening Reception in the AMERICOM Government Services (AGS) Exhibit Center.

Much of the event is made possible through the support of a number of major sponsors and co-sponsors:

For more details on the Strategic Space Symposium, including agenda and speakers, click here.