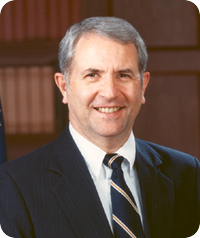 In December, the Colorado Springs Fine Arts Center opened an exhibition of space art: NASA | ART: 50 Years of Exploration. Scheduled to run through March 7, and organized by the Smithsonian Institution Traveling Exhibition Service and the National Aeronautics and Space Administration (NASA), in cooperation with the Smithsonian’s National Air and Space Museum, the exhibit includes 73 works of art, plus a film series, and lectures.

Lecturing on Jan. 16 will be the Honorable Richard H. Truly, an astronaut, former commander of the Space Shuttle Challenger, and Life Director of the Space Foundation.

Truly’s career as an astronaut included NASA’s Apollo, Skylab, Apollo-Soyuz, and space shuttle programs. In 1981, he piloted Columbia, the first shuttle to be reflown into space, establishing a world circular orbit altitude record. In 1983, he commanded Challenger, the first night launch/landing mission of the Space Shuttle program. Truly left NASA in 1983 to become the first commander of the Naval Space Command, in Dahlgren, Va.

Following the Challenger accident in 1986, Truly was called back to NASA as associate administrator for Space Flight and led the accident investigation. President Reagan awarded Truly the Presidential Citizen’s Medal in 1989, and he served as NASA administrator from 1989 to1992.

Truly’s many NASA awards include two Distinguished Service Medals, the Outstanding Leadership Medal, the Exceptional Service Medal, and two Space Flight Medals. He is a member of the U.S. Astronaut Hall of Fame.