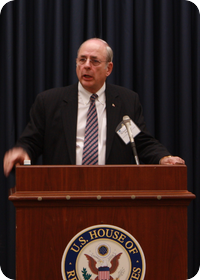 The Space Foundation, in partnership with the National Defense Industry Association (NDIA), held the last Space Power Lecture Breakfast of 2009 on Dec. 8 in Washington, D.C. Featured speaker Norm Augustine, chairman of the Future of U.S. Human Spaceflight Plans Committee and former Lockheed Martin chairman and chief executive officer, talked about the challenges facing the space industry and answered questions from the audience, which included members of Congress, high-level military and Department of Defense leaders, congressional staffers, and representatives from Space Foundation and NDIA member companies.

Augustine said that he feels that space is more of a high-ground than ever, but that he is concerned about the United States' history of stating programmatic goals without providing the adequate funding. He reiterated his feeling that NASA, in particular, needs better funding and that the U.S. needs to cooperate better with other nations, including being prepared to have more partners in the 'critical path' of programs.

Among Augustine's other points were: