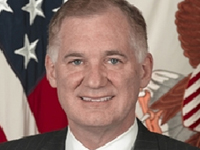 COLORADO SPRINGS, Colo. (Mar. 25, 2010) — The lineup of speakers at the 26th National Space Symposium has become even more impressive with the addition of the April 14 featured speaker, The Honorable William J. Lynn, III, deputy secretary of defense.

Slated for April 12-15 at The Broadmoor Hotel in Colorado Springs, the 26th National Space Symposium offers workshops, forums, panels, and presentations covering all aspects of space.

Learn more about the agenda, speakers, and special Symposium events at www.NationalSpaceSymposium.org/.

Before entering the Department of Defense (DoD) in 1993, Lynn served for six years on the staff of Senator Edward Kennedy as liaison to the Senate Armed Services Committee. Prior to 1987, he was a senior fellow at the National Defense University and was on the professional staff of the Institute for Defense Analyses. He also served as the executive director of the Defense Organization Project at the Center for Strategic and International Studies.

Lynn has experience in the private sector, as senior vice president of government operations and strategy at Raytheon Company and executive vice president of DFI International, a Washington-based management consulting firm.

A graduate of Dartmouth College, Lynn has a law degree from Cornell Law School and a master’s degree in public affairs from the Woodrow Wilson School at Princeton University. His publications include a book, Toward a More Effective Defense, as well as articles in various newspapers and professional journals. He has been recognized for numerous professional and service contributions, including three DoD medals for distinguished public service, the Joint Distinguished Civilian Service Award from the Chairman of the Joint Chiefs of Staff, and awards from the Army, Navy, and Air Force.