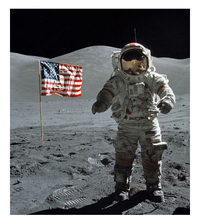 The first and last Americans to walk on the Moon voiced their opposition to the president’s proposed plan for NASA’s exploration program at a Senate Commerce, Science and Transportation Committee hearing May 12 on The Future of U.S. Human Space Flight.

Sen. Jay Rockefeller IV (D-WV) acknowledged that jobs were an important priority for the country, but the White House’s proposed FY 2011 NASA budget could not be solely judged in terms of the job creation. Rockefeller urged his colleagues to find a balance between economic development and modernizing the Nation’s space program; a goal Dr. Holdren said the President’s proposed budget would enable.

Cernan said the plan lacked challenges, focus, and represented a blueprint for a “mission to nowhere.” Augustine, who led last year’s presidential review of U.S. human spaceflight, reminded Congress that if it chose to continue the status quo without providing the proper funding it would “place the nation in the same precarious position five to ten years from now.” Rockefeller closed the hearing with a reminder that NASA has a broad portfolio of priorities that it cannot lose focus on in the debate over human space flight.