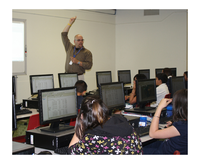 Thanks to a multi-million dollar donation from Analytical Graphics, Inc., (AGI) sixth graders at Jack Swigert Aerospace Academy in Colorado Springs were able to complete their multi-curricular study of the International Space Station (ISS) in a state-of-the-art space missions simulator. The sixth graders programmed a simulation predicting when the ISS will be visible over Colorado Springs in June.

“The students were absolutely amazed at what they created,” said Bryan DeBates, Space Foundation senior aerospace education specialist. “They were able to do in two class periods what aerospace engineers do.”

The simulator includes 30 student stations and one teacher station and may be used by any school district, when it’s available.