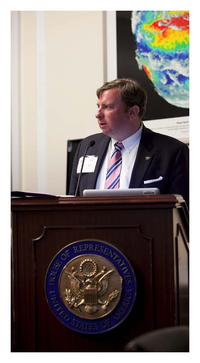 “There really is a larger universe out there and bigger things than just what we focus on day-to-day. You really sparked my interest and imagination. Thanks for doing this.”

That’s a comment from one of the attendees of a Space Foundation breakfast held July 15 in Washington, D.C., where Dr. Ronald Greeley and Dr. Robert Pappalardo, who are both doing work in conjunction with the Johns Hopkins University Applied Physics Laboratory (APL), talked about space science research that focuses on Jupiter and her more interesting moons: Io, Europa, Callista, and Ganymede.

Space Foundation Vice President – Washington Operations Brendan Curry set the tone for the meeting by talking about the value of space science in understanding where we came from as well as our place in the larger universe. “So much of the contentious issues of the day may seem important at the moment, but will probably not matter much one, fifteen, 100 , or 1,000 years from now,” said Curry. “The accomplishments in space will be lasting testaments to our civilization.”

Greeley is a Regents’ Professor in the School of Earth and Space Exploration (SESE) at Arizona State University. He also serves as director of the NASA-ASU Regional Planetary Image Facility, chair of the NASA Advisory Council (NAC) subcommittee on space science, and principal investigator of the Planetary Aeolian Laboratory at NASA-Ames Research Center.

Pappalardo is a senior research scientist in the Planetary Science Section of the Science Division of the Jet Propulsion Laboratory (JPL) at the California Institute of Technology. He is the project scientist for the Europa Jupiter System Mission (EJSM) and was formerly an affiliate member of the Galileo Imaging Team and oversaw many of the Galileo observations of Jupiter’s icy Galilean satellites.

Much of the discussion focused on EJSM, which is a joint international project involving NASA and the European Space Agency (ESA) that is exploring the Jupiter system. Projects include monitoring Io’s volcanoes and Jupiter’s atmosphere, mapping the Jovian magnetosphere and its interactions with the Galilean satellites, and characterizing water oceans beneath the ice shells of Europa and Ganymede.

By understanding the Jupiter system and unraveling its history from origin to the possible emergence of habitable worlds, the study hopes to gain a better understanding of how gas giant planets and their satellites form and evolve, and on the potential for the emergence of life in the galactic neighborhood and beyond.

“The Space Foundation sponsors events such as this to help industry leaders and space policy makers understand complex and far-reaching challenges and opportunities of space exploration – including facets that are often overlooked as budgets and plans are being formulated,” said Curry. “The topics are informative – and, as our guests told us, incredibly interesting.”

APL, which developed the agenda for the event, is a not-for-profit center for engineering, research, and development located north of Washington, D.C. at one of the world’s premier research universities, The Johns Hopkins University (JHU). The Laboratory has been a major asset to the nation since it was organized to develop a critical World War II technology in 1942. APL works on more than 600 programs that advance the nation’s vision in research and space science, at an annual funding level of about $980 million. APL is a Space Foundation corporate partner.