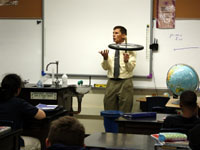 COLORADO SPRINGS, Colo. (Sep. 27, 2010) -- Harris Corporation celebrated National Aerospace Week (Sept. 12-18) by providing two employees who volunteered their time to work with 180 eighth grade students at Jack Swigert Aerospace Academy in Colorado Springs. The students spent part of one day in the AGI Space Missions Simulator at the Space Foundation Discovery Institute and the next day received a hands-on classroom demonstration about the forces that act on satellites.

By the end of the two days the students had learned about Newton's laws of motion and the concepts of angular momentum as they relate to satellites and were able to manipulate the STK software in order to change properties of satellite orbits in space.

The Jack Swigert Aerospace Academy curriculum, which is collaboratively developed by the Space Foundation and Colorado Springs School District 11, uses space themes and principles to teach a broad range of subjects, with focus on improving students' proficiency in science, technology, engineering, and mathematics (STEM).

About Harris Corporation
Harris is an international communications and information technology company serving government and commercial markets in more than 150 countries. Headquartered in Melbourne, Fla., the company has approximately $5 billion of annual revenue and more than 16,000 employees - including nearly 7,000 engineers and scientists. Harris is dedicated to developing best-in-class assured communications® products, systems, and services.

Additional information about Harris Corporation is available at www.harris.com.