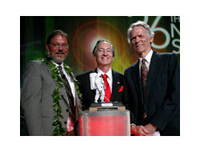 An exceptional educator will earn acclaim by winning the 2011 Alan Shepard Technology in Education Award – but you must apply to win.  The application deadline is Jan. 15, 2011.

Applications are now being accepted from teachers who have demonstrated a commitment to inspiring students’ interest in science, technology, engineering and math (STEM). Given annually by the Astronauts Memorial Foundation (AMF), the National Aeronautics and Space Administration (NASA) and the Space Foundation, the Alan Shepard Technology in Education Award recognizes outstanding contributions to technology education by K-12 educators or district-level education personnel.

The Space Foundation will present the award, which is named after Mercury Astronaut Alan Shepard, on April 11 at the Opening Ceremony of the Space Foundation’s 27th National Space Symposium at The Broadmoor Hotel in Colorado Springs, Colo.

To Apply
Application information is available at www.AstronautsMemorialFoundation.org. Submissions for the 2011 award must be postmarked no later than Jan. 15, 2011. The winner will be announced on March 4, 2011.