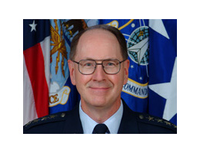 During the hearing, Kehler outlined his top four priorities as commander, if confirmed: