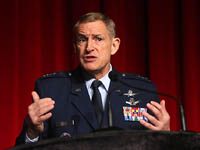 COLORADO SPRINGS, Colo. (Apr. 11, 2011) — Air Force Space Command’s second-in-command said the Air Force is working to build cyberspace from an organizational, equipment and training perspective to provide access to and use of the cyberspace domain to the joint warfighter.

Basla said that the cyberspace domain is unique when compared to the other operational domains of the Air Force, air and space.  Basla said that the air and space domains are governed by immutable and unchanging laws of physics, while the nature of the cyberspace domain changes regularly as a product of human ingenuity. He explained that the continual evolution of the cyberspace domain makes constant evolution of situational awareness capability both a top priority and a uniquely difficult task. Additionally, he explained there needs to be understanding that spectrum is a limited natural resource that links different operational domains and different activities, from sensors to command and decision making.

Basla outlined the three elements to the USAF approach to defense in cyberspace:

« It All Starts Tomorrow