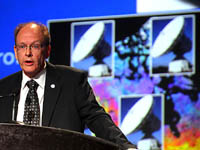 COLORADO SPRINGS, Colo. (Apr. 13, 2011) — In her role as moderator, NASA Deputy Administrator Lori Garver, kicked off the Global Leaders: National Programs — International Collaboration panel at the 27th National Space Symposium by outlining NASA’s current status and approach to international cooperation. Citing the NASA vision “to reach for new heights and reveal the unknown so that what we do and learn will benefit all mankind,” she said there is a strong bilateral consensus on space in the United States about the need to explore space beyond LEO. She said NASA also continues to support human spaceflight and make progress on a new space launch system. With respect to goals for human exploration beyond LEO, she said an asteroid mission is the best choice, because it represents the best compromise between capabilities NASA already possesses and capabilities it will need to acquire to enable further human exploration. Garver said that NASA also realizes the need to work differently with industrial partners and that using fixed-price contracts for basic tasks, such as sending people into space, allows NASA to devote its funds to developing breakthrough disruptive technologies and exploration. “It is nonetheless critical that the U.S. be able to send U.S astronauts, flying on U.S. vehicles, to the International Space Station,” she said. “The national space policy places an emphasis on enhancing international partnerships. Cooperation and collaboration reduces partner costs while maximizing benefits.”

According to Farina, Canada cooperates internationally on many projects and programs, including the disaster relief, search and rescue, exploration and the ISS.
Farina explained that the Canadian space program is organized into three groups: utilization, technology development and exploration:

Dr. Johann-Dietrich Wörner spoke about the German experience in international cooperation in space. Historically, he said, space has been the product of competition in the context of both hot and cold wars, revolving around politically driven demonstrations of power highlighting national success. International cooperation is limited globally, and even somewhat restricted in Europe, because industrial competition and national vanities continue to hinder cooperative efforts. In future, we can expect a shift of paradigms to enhance cooperation, collaboration and unrestricted international commercial engagement. He said he also expects to see greater synergies between robotic and human exploration, with robotic exploration as a first step, leading ultimately to human exploration.

Wörner said that future exploration objectives will be set at the governmental level, and funded publicly, including participation from academia. He said public infrastructure efforts should continue to be specified by governments, and future security applications will be operated by governments. In particular, he said, synergies through more complete exploration of the dual-use space will provide for new avenues for cooperation discussions. Finally, he said, a new coalition between technology and culture will be a significant driver of global space activity in future decades.

During the question and answer session, Farina indicated that budgets will be the biggest immediate barrier to international cooperation, while Wörner noted that partnerships between “senior” and “junior” members are ultimately untenable, and must be replaced with a real partnership of peers. Even if both partners are not peers in terms of funding or capabilities, he said, a strong hierarchical component isn’t really meaningful cooperation.