Ruppersberger Supports Return to the Moon 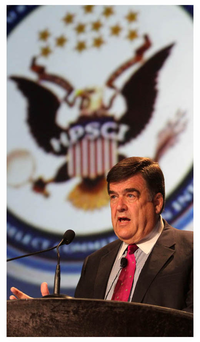 Despite 50 years of strength and our current position of technological leadership in space, Congressman C.A. “Dutch” Ruppersberger (D-MD) said our space program is slipping.

Speaking at the 27th National Space Symposium, Ruppersberger said that, between policy and budgetary uncertainty, the future is unclear. He said we must address four areas to reorient and refocus our space efforts and re-establish our strength and leadership: budget and schedule slippage, export control reform, launch costs and reliability and exploration efforts.

Among other things, Ruppersberger suggested using Nunn-McCurdy tools to keep programs on time and budget, employ proven technologies, and leverage interagency processes to share costs and increase utility. More broadly, he said, we cannot continue to retire systems before the new replacement capability is in place. He also suggested that the U.S should put an end to ITAR restrictions, which stifle innovation and have crippled U.S. competitiveness, reducing our marketshare of satellite manufacturing from 70 percent to 27 percent. He said that legislation has passed the House, but has stalled in the Senate, but, nonetheless, ITAR reform has garnered the attention of the Administration, thus making future progress possible. In addressing launch capabilities, Ruppersberger said the U.S. needs to stop relying on Russian-made RD-180 engines for use with government payloads.

For exploration, Ruppersberger said the U.S. should recommit to a return to the Moon, but that there is no point in racing Russia or China to re-establish a human presence, since the U.S. has already been there before. Instead, he said, the U.S. return to the Moon should be robotic to create a virtual, cybernetic presence in the more immediate term, allowing re-establishment of an American human presence on the Moon to be more measured and intelligently paced.