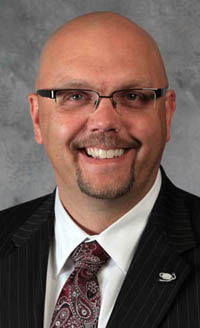 During the month, students participated in hands-on, team building activities that focused on many different space topics each day. On one day, students created mission patches for their team, representing their Upward Bound mission to attend college. They also learned about what it's like to live in a microgravity environment. They participated in disorientation activities, including a Barany Chair experience and goggles that off-set their vision.

The students learned about healthy eating and exercise, and they created menus for a long-duration space mission using actual meal plan menus from the International Space Station (ISS). The workshop concluded with a discussion of astrobiology and the possibility of life elsewhere in the universe. Then the students designed and created their own "aliens." The day ended with a movie featuring the film October Sky. After the film, the students discussed the importance of the Space Race with the Soviet Union. 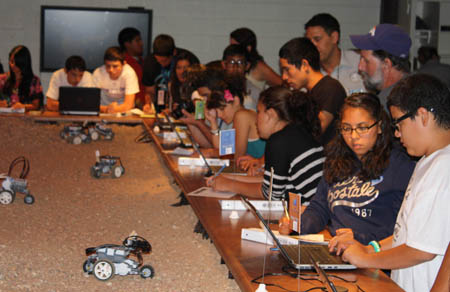 Another day focused on robotics. The students learned about the history of robots, participated in a team building activity centered around the Mars rovers and communication. They created a robot endeffector (the functional part of a robot) that simulated the Canadarm on the ISS. The students also built a robotic hand that mimicked the human hand.

The final team activity was a Lunar lander design challenge where students had to build a simulated lander that could safely land astronauts on the moon. That evening the students were the guests of honor for an "Audience with an Astronaut" community event featuring former astronaut James F. Reilly, II, Ph.D., who shared his experiences in space.

Wednesday morning, Dr. Reilly spoke to the students about geology in space operations and the importance of robotic missions. The students were able to get an autographed photo of Dr. Reilly and posed for pictures with him. The students then designed and built water rockets that they launched later that day.

The Upward Bound students traveled to the Space Foundation Discovery Institute in Colorado Springs for two days conducting experiments with microgravity and experiencing simulated missions in the Mars Yard and Robotics Lab and in the AGI Space Missions Simulator. 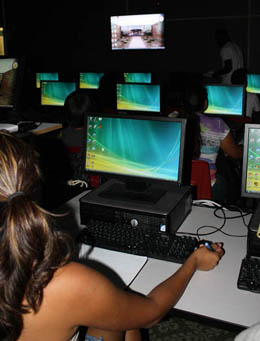 Response from all of the students was very positive and supported the Space Foundation's education mission to strengthen STEM skills so that today's students can go on to become scientists, engineers, mathematicians, teachers and supporters of space exploration.