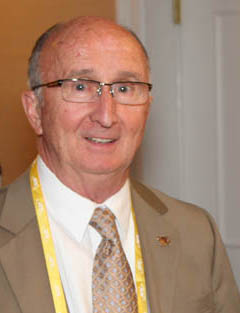 Zimkas has been with the Space Foundation since 1986, following a 26-year Air Force career, during which he was selected as one of the Twelve Outstanding Airmen of the Year for the United States Air Force, as senior enlisted advisor for NORAD and as the first Air Force Space Command senior enlisted advisor. After Zimkas’ Air Force retirement, Air Force Space Command dedicated its Enlisted Heritage Room in his honor. Zimkas is active in national, regional and community activities, including serving as a member of the Rocky Mountain Chapter of National Defense Industrial Association (NDIA), the Lance P. Sijan Chapter of the Air Force Association (AFA) and as vice president of the Arrowswest Owners Association Board. He is an Emeritus Member of the AFA National Board of Directors.

“We’re pleased to be able to recognize the extraordinary accomplishments of Chuck Zimkas over more than 25 years with the Space Foundation,” said Pulham.  “Chuck’s leadership has been instrumental in assuring mission success during recent years of dramatic growth at our organization.”

In his new position, Zimkas continues to be responsible for operations, customer service, facilities, human resources, event planning, information technology, logistics and operation of the new Space Foundation Visitors Center. In addition, both the Space Foundation’s education enterprise and its marketing and communications group now report to Zimkas.