Widely known as the most significant annual global space industry conference, the Space Foundation’s Space Symposium will be held April 11-14 at The Broadmoor, in Colorado Springs, Colo., attracting thousands of participants from dozens of countries, including the world’s leading decision makers from civil, military, government, commercial and academic institutions. 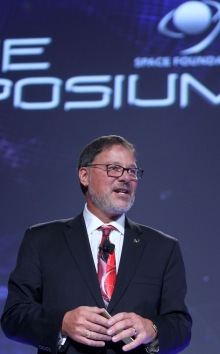 The opening ceremony will continue with a performance by Tower of Power and presentation of the Space Foundation’s top awards. Recipients are:

The opening ceremony will be followed by the grand opening of the Lockheed Martin Exhibit Center and Pavilion, featuring the world’s latest space technology, equipment and services. The evening concludes with fireworks lakeside, co-sponsored by Intelsat General Corporation.

See all of the confirmed speakers for the 32nd Space Symposium at www.SpaceSymposium.org.