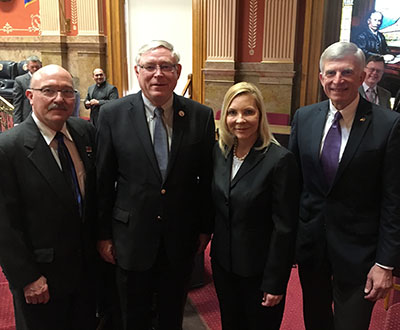 The General Assembly of the State of Colorado recently adopted Senate Resolution SJR19-008, Concerning the Recognition of the 35th Space Symposium and Celebrating the Premier International Space Policy and Program Forum. The Resolution was adopted by the General Assembly during its 2019 legislative session and reads as follows:

CONCERNING THE RECOGNITION OF THE 35TH SPACE SYMPOSIUM AND CELEBRATING THE PREMIER INTERNATIONAL SPACE POLICY AND PROGRAM FORUM.

WHEREAS, The Space Foundation is a global nonprofit leader in space awareness activities, educational programs, and major industry events; and

WHEREAS, The Space Foundation was founded in 1983 with a mission “to advance space-related endeavors to inspire, enable and propel humanity11  and has its world headquarters in Colorado Springs, Colorado; and

WHEREAS, Colorado is home to the United States Air Force Space Command, more than 300 aerospace companies, and suppliers that develop products and systems for commercial, military, and civil space activities; and

WHEREAS, The Space Foundation’s Space Symposium, held at The Broadmoor in Colorado Springs, Colorado, annually brings together civil, commercial, and national security space leaders from around the world to discuss, address, and plan for the future of space; and

WHEREAS, The inaugural Space Symposium in 1984 was attended by approximately 250 space enthusiasts, and participant numbers in recent years have surpassed 11,000; and

WHEREAS, The annual Space Symposium results in approximately

$30 million in economic impact to the local economy; and

WHEREAS, The Space Symposium has become widely known as the premier space policy and program forum in the world; now, therefore,

Be It Resolved by the Senate of the Seventy-second General Assembly of the State of Colorado, the House of Representatives concurring herein: