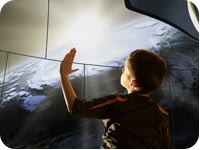 COLORADO SPRINGS, Colo. (Oct. 30, 2008) — The Space Foundation announced “The Next Space Age” as the theme for the 25th National Space Symposium. Celebrating its silver anniversary, the National Space Symposium is the premier annual gathering of the global space community. The event will take place March 30 – April 2 at The Broadmoor Hotel in Colorado Springs, Colo.

“With the first half-century of the space age behind us and the industry changing on a global scale, now is the perfect moment to look seriously at the coming 50 years, or ‘The Next Space Age,'” said Elliot Pulham, president and chief executive officer of the Space Foundation.  “The industry is mature and global, more space-faring nations are on the rise, the age of space access for everyone is rapidly approaching, and here in the U.S. we will have a new administration and Congress.  All these factors set the tone for ‘The Next Space Age’ which begins at the 25th National Space Symposium.”

For 25 years, the symposium has worked to bring together all sectors of space – civil, commercial, and national security – to highlight the accomplishments and address the opportunities and issues facing the space industry. This symposium’s theme “The Next Space Age” reflects the new wave of efforts and advancement in space. The theme and accompanying artwork will be carried throughout the symposium from the exhibit center to a program agenda featuring panels and keynote speakers from across the space industry.

The Space Foundation commissioned the art work for this silver anniversary event by artist Richard Green, who has done eye-catching work on 3-D and futuristic designs for a number of companies, including Mondo Media and Lucas Art Entertainment Company Studios. The artwork’s depiction of a futuristic space home and astronaut family looks forward to the achievements of “The Next Space Age” and the upcoming generation of scientists, innovators, and explorers that will inspire, enable, and propel us there.

The 25th National Space Symposium will kick off with a fantastic Opening Ceremony and Opening Night Reception. The program agenda begins on Tuesday, March 31, with the keynote panel “The Next Space Age.” Panel discussions throughout the event will focus on the changing customer and partner relationships, end user products, business models, and regulating procedures for future space activities. For the first time ever, the program will present the “Space Commander’s Forum,” a panel featuring past commanders of U.S Space Command and U.S. Strategic Command. New Air Force missions will be discussed in “The Air Force and Cyberspace – Expanded Missions for the Next Space Age” panel. “A New Generation for the Next Space Age” panel takes a look at “The Next Space Age” through the eyes of the up-and-coming generation of space scientists, engineers, program managers, and explorers. The Foundation is also developing a variety of education programs to be conducted in conjunction with the symposium.

More than 8,000 registrants, guests, speakers, exhibitors, and media from across the United States and around the world are expected to attend the 25th National Space Symposium.  Participants, who represent both the future and history of this $251 billion industry, include senior executive leadership from NASA, NOAA, and other civil space and government agencies; the commercial space and satellite broadcasting industry; the Department of Defense and military space commands; space entrepreneurs; universities and academia; and senior representatives from the global space industry.

Online registration and more information, including an updated program agenda and early confirmed speaker list, are available at www.NationalSpaceSymposium.org.

About the Space Foundation
Founded in 1983 and celebrating its 25th anniversary this year, the Space Foundation is an international nonprofit organization advancing space-related endeavors to inspire, enable, and propel humanity.  A leader in space awareness activities, major industry events, and educational enterprises that bring space into the classroom, the Space Foundation is headquartered in Colorado Springs, Colo.  It conducts research and analysis and government affairs activities from its Washington, D.C., office and has field representatives in Houston, Texas, and Cape Canaveral, Fla.  Along with partnering organizations, the Space Foundation conducts Space Business Forum: New York on June 4, 2009 in New York, N.Y. and Strategic Space and Defense 2009 from 6-8 October in Omaha, Neb.  For more information, visit www.SpaceFoundation.org.

« The Report from Washington D.C.