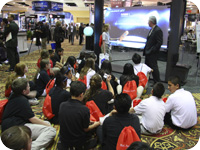 This article is based on a comprehensive review of Economic Impacts, Workforce, and Education in the space industry found in The Space Report 2009: The Authoritative Guide to Global Space Activity. To get more information or purchase a copy of the report, go to www.TheSpaceReport.org.

There is a projected increase in the number of space-related jobs that will be available in the coming years, but deepening concern in the U.S. that young people are not receiving the education they need in science, technology, engineering, and mathematics (STEM) to prepare them for careers in the industry. This is a particularly difficult issue because the required technical expertise has a long educational pipeline, beginning in elementary school and continuing through secondary and higher education.

The most recent data shows that American students are slipping behind their international counterparts in math and science education and that too few students are undertaking rigorous studies to prepare for postsecondary STEM subjects. This situation is exacerbated as other nations such as China have become more aggressive in developing their technical talent base. The quality of K-12 science and math education will not sustain U.S. global competitiveness in science and engineering and, although the number of advanced degrees awarded in the United States for space-related fields of study has been on the rise for years, virtually all of this growth can be attributed to an increasing percentage of foreign graduate students in these subjects.

Here are some disturbing statistics:

To ensure an appropriately trained aerospace workforce for the future, students must receive a solid math and science education from an early age and they must be inspired to continue to study math and science. This requires investments in STEM education, including increasing the number of qualified teachers, increasing the amount of math and science required for high school graduation, and starting STEM education earlier in the curriculum. Unfortunately, it will take five to 10 years for improvements launched today to affect the quality of candidates entering the job market – and, unless the current declining trend of space university critical degrees is reversed, many of the projected new space jobs may go unfilled.

During the U.S. Apollo project in the 1960s, the United States was able to attract the best human capital from around the world, enabling America to get to the Moon first, establish a strong U.S. space industrial base, and spawn many high-tech and leading-edge industries. The key to maintaining U.S. technological preeminence in the future is to continue to encourage and develop skilled scientists and engineers who contribute to strengthening the space industry. And, as an added bonus, addressing education challenges will go far beyond improving the health of the space industry; it will benefit the entire U.S. economy and many state and local economies.