Opening "Would Have Pleased" Astronaut Swigert 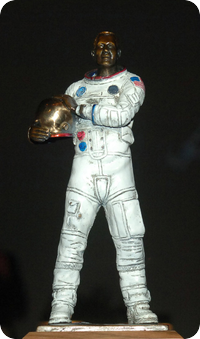 Jack Swigert served on NASA's Apollo 7 and Apollo 13 missions and died from bone cancer in 1982 shortly after being elected to the U.S. House of Representatives. The Space Foundation was founded in part to honor his memory and accomplishments.

Ms. Swigert traveled from the Denver area to attend the celebration dedicating the school to her brother's memory. She said that although her brother never had children, "he loved children and always took time to give them attention and encouragement."

The Jack Swigert Aerospace Academy is a unique aerospace-themed public middle school created through a partnership between the Space Foundation and Colorado Springs School District 11 (D-11). For more details, see related article in this issue of Space Watch.

The celebration began with the arrival of a Colorado Springs Police Department helicopter. A formal ceremony included a space launch video, a color guard from Ft. Carson Army Post, presentation of a school photo to Ms. Swigert, and presentation of a statue of Jack Swigert (shown here) to the Academy. Formal comments were made by:

Virginia Swigert shared remembrances about her famous brother and summed up the day's events, "He would have been pleased."